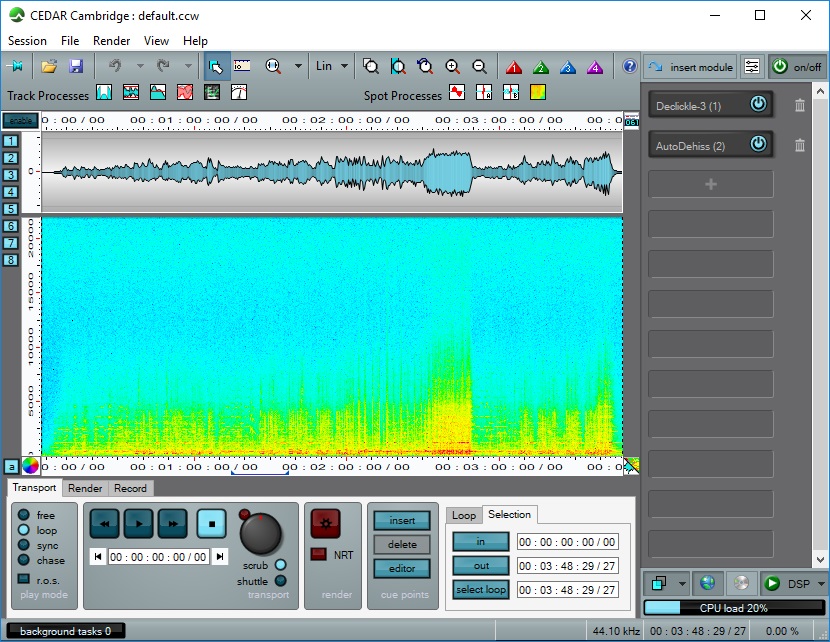 Completely modular, fully automated when desired, and capable of integration with today's asset management systems, it can process up to 100 times faster than real-time (or more, depending upon hardware), can support multiple users, and can process huge bodies of material quickly and efficiently. The system will also integrate with MAM systems and can generate reports for every track that it processes so that the audio and its associated metadata can be added efficiently to users' databases. CEDAR Cambridge is the system of choice for many of the world's most important police and security forces, national sound archives and libraries as well as post production houses, CD and DVD mastering studios and broadcasters.

Power and flexibility married to simplicity and productivity... It was important to ensure that controlling CEDAR Cambridge should be both quick and easy so we developed CEDAR's innovative process management system which allows you to invoke all of the system's tools, setup pages and processing modules. Offering waveform and spectrogram views or both simultaneously, the clear user-interface provides everything you need on a single screen: the ability to open files and file sequences (which are particularly useful for forensic and security users), session management, intuitive transport controls, variable playback speeds, scrubbing, zooming, sample-accurate looping capabilities, time slipping, time markers and all the tools needed to process single or multiple audio files quickly and efficiently.

Although the system remains capable of processing world-to-world audio in real-time, it's far more likely that you will wish to work with audio files so, once you have determined your audio source, it couldn't be easier to apply the processes of your choice to each of the channels. Simply select from the various streaming, spot and track processes, and the chosen process is available across all the selected channels. When using streaming processes, you can quickly change the processing order by dragging and dropping a module from one position in the processing chain to another.

Until the appearance of CEDAR's patented Retouch™ process, audio restoration systems were limited as to the types of noises that they could remove; there was nothing that allowed you to identify and manipulate individual sounds. Nowadays, we take these facilities for granted, but Retouch remains not only the first but still the most powerful spectral editor ever developed.

Noise suppression is needed to clean up noisy dialogue for film production, to suppress ambient noise for TV and radio, to revitalise speech libraries, and to enhance recordings for forensic audio investigation and transcription. In the past, this meant using conventional filters, noise gates, dynamics processes, or processes developed from analogue encode/decode noise reduction systems. But these proved to be inadequate, so we developed our Academy Award® winning dialogue noise suppression processes to remove the rumble, hiss, whistles, broadband noise and more from contaminated audio.

There's a tendency to think that digital dehissers are all equal - magical processors that somehow remove all of the noise without any side-effects or damage to the wanted audio. This isn't true; it's quite easy to remove noise, but it's very difficult to do so without introducing strange artefacts, and even more difficult to do without reducing the high frequency content of the wanted audio or introducing unwanted compression.

CEDAR's 'NR' and Auto Dehiss processes are based upon a sophisticated core algorithm than concentrates on minimising artefacts, dullness and compression. These have been used on countless music tracks, film and TV soundtracks, forensic recordings and much more.

Impulse noises - including burst of noise as well as the more traditional clicks, crackle and thumps - can infect every piece of audio, whether caused by (for example) a bad cable connection, digital errors, someone kicking the microphone stand, or the decay of vinyl and earlier discs. Not all of these can be removed using a single process, so CEDAR Cambridge offers four modules that cover all eventualities, ranging from the tiniest crackle to the largest clicks and thumps.

In addition to the obvious audio restoration processes, there are some that are equally important but don't fit into any other class. Most restoration systems will have one or more of these installed because everywhere you look you'll find buzzes, hums, clipping caused by unwanted signal levels, and even timing errors on stereo or multi-track recordings.

CEDAR Cambridge offers no fewer than ten powerful dynamics, loudness control and equalisation modules. These provide everything ranging from normalisation, compression, expansion and limiting to precise loudness control conforming to EBU, ATSC and other worldwide standards, to exceptional EQs and our unique Reshape process which takes the concepts of matching equalisation to a whole new level.